Sketched this out real quick in Photoshop this morning. We are having Easter at our house and I’m trying to stay out of everyone’s hair while they get things ready. ZomPokemon! I never really played much Pokemon, but I always liked the characters a lot. 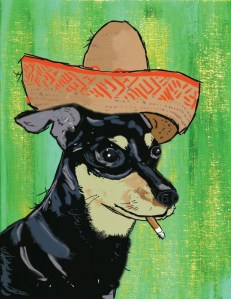 Here is something new I just finished. It’s a digital painting of my dog, Elvis. He is smoking a cigarette and wearing a sombrero. Silly Dog. I added some spraypaint stencil to the background after I printed this out. You can view the finished print at my facebook page here. 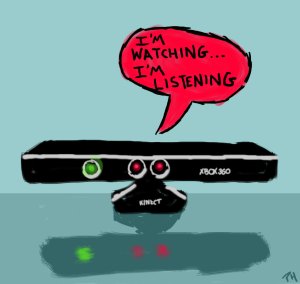 These two spot illustrations were used for my Retro Video Game blog which can be found here. WWW.POOGLETSAUCE.WORDPRESS.COM 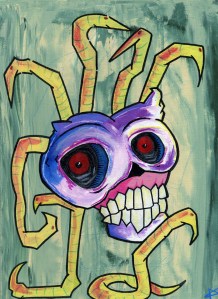 This painting titled “WORMS ON THE BRAIN” I finished about a year or two ago. I just started making prints of it though so I had it laying around and thought I’d post it up on here.

Some of my work is also being shown at SEDSO Gallery in Philladelphia tonight. There’s some killer art being shown, free beer and Live Painting as well. If you are around the area you should go. The info for the show is below. 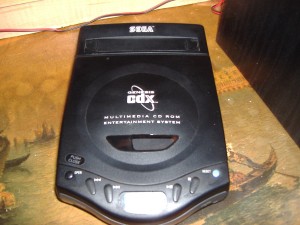 A long while back I had picked up a Sega CDX for $40.00. It came with a box full of games, two controllers and the Sega Classics Arcade Collection 5 in 1.

I was very happy to have found one of these so cheap especially with a box full of games (I’ve seen these go for $140 or more on ebay). The thing was awesome and it runs great. Sega CD games load up 90% faster than they do on my old Sega CD unit. The only problem with the system was that it was always stuck with the power on. As soon as I would plug the system in it would power up. It wasn’t a big deal when playing Sega CD games because I could just switch out a disk and press reset. Playing Genesis games however was annoying, I would have to unplug the system to switch cartridges. I wasn’t sure if this is how Sega CDXs always act or not, I looked at a few videos on-line and realized that all CDXs don’t act this way and that there was something wrong with my power button. For a long time I left the CDX the way it was. Recently, I decided to order an electronics screw driver set in order to open up the CDX and fix whatever was wrong with the power button.

I received the screw driver set on April 4th 2011 and it is a great tool to have. I can’t imagine any electronics device that I won’t be able to open up with this set. I had read on-line how difficult these things are to work on, but I figured since I’m only trying to fix the power button it shouldn’t be too difficult. Boy was I wrong, the electronics in this thing are packed in like sardines in a can, there is no wiggle room .The main circuit board sits over top of the area were the power button/spring etc. sit. Below that sits the Cd housing etc. (luckily I was able to leave that where it was). After I took the CDX apart I immediately noticed what the problem was. The little plastic arms that connect the power button to the actual power switch was broken in half. The spring was also bent upwards slightly. I couldn’t figure out how this could have happened because it looked like the system had never been opened before (there were no fingerprints showing on anything). I decided this could be fixed easily, if I could push the spring back into place and then super glue the plastic arms back together. I attempted to ease the spring back into place with a pair of tweezers and proceeded to shoot the spring across the room never to be found again. Great! So now I also needed to find a replacement spring ( a tiny spring).

I tried a few springs I had lying around, none of them fit. I then went to Home Depot and picked up a box of assorted springs for about $4.00. None of those fit either. I let the Sega CDX sit for a few weeks and then started looking at items I had around the house trying to figure out if they would have the right size spring. I pulled a lighter apart and found the right size spring. 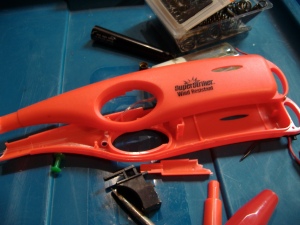 I fit it in, super glued the plastic that was broken and tested it out. The spring was pretty weak and didn’t push back 100% of the time. I decided to add another spring above the power mechanism and now the power button feels right when I press it in. I tested it out for about an hour changing disks and cartridges and turning the system on and off. It works perfectly now! 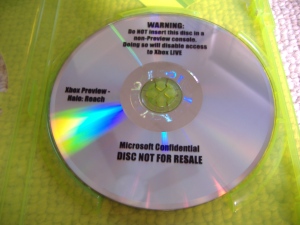 I got into the Xbox live Beta a while back and had been waiting impatiently for this. Can’t wait to play it tonight!

Update (4/12/11): I played Halo: Reach last night for about an hour. The game played great. Technically I am not supposed to talk about the Beta, but I assume that is because Microsoft doesn’t want any bad experiences getting out to the public. Well my experience so far has been fantastic. I wouldn’t be surprised if the new dashboard/disk format gets released to the public very soon.

This past week I came across a few video game related finds. I expected to come across a lot more than I actually did because this weekend kicked off the beginning of flea market season in the area that I live. At the first flea market that I went to (on Saturday) I came across a great deal on a Nintendo 64. It was $10.00 and it came with the jumper pak and a bag full of games (there were probably 6 or 7 games in the bag). I owned most of the games already and had no need to bring home a 3rd Nintendo 64. I tried really hard to come up with a reason to buy the Nintendo 64, but in the end I realized I really didn’t need another duplicate system. I hope someone picked it up though because it really was a great deal. Other than that I didn’t come across anything good on Saturday. On Sunday I went to my local community college’s flea market. I was sure that there would be tons of great stuff at the flea market because people had been holding on to stuff all winter that they wanted to sell. I came across a few tables that were selling Sega Genesis sports games for way too much. I was pretty bummed out while I was walking down the last aisle of the flea market when I came to a table that was selling Wii, Xbox, PS2, Ninetendo, Nintendo 64, Genesis and Game Gear games. I spied a copy of Cruis’n Exotica for N64 sitting on the table for $5.00. I ended up getting the game for $3.00 thanks to my Mom who was also at the flea market with me (she is a great haggler).

My best find this weekend wasn’t really a find per se. My good friend Josh has been storing his car in my garage while he gets it fixed up so that he can get it on the road. He stops by on the weekends to work on it, but this past weekend when he came he had a box full of goodies for me! He knows that I collect anything video game related and the box he brought me contained an Atari 2600 and a ton of games. The Atari was covered in dust, but after I cleaned it up it turned out looking quite nice. 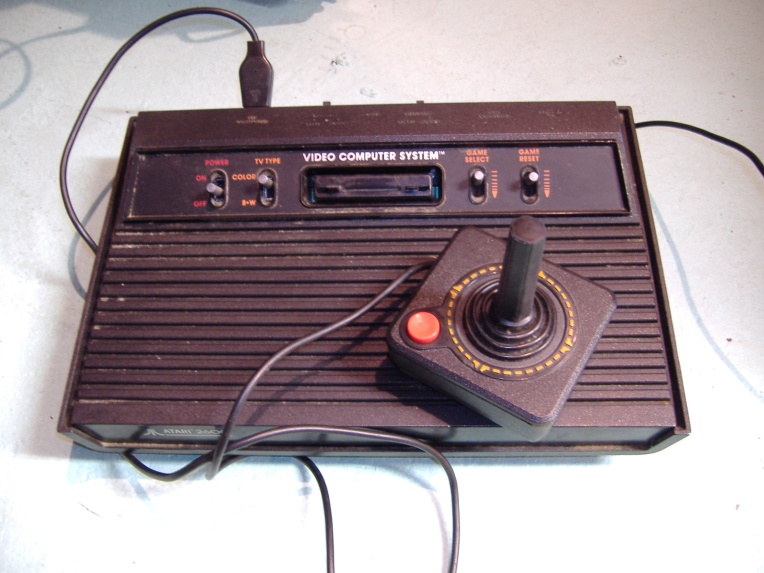 In the box there were a ton of loose games, some were doubles but not too many of them. Some of the better games I tried were Moon Patrol, Ms. Pacman, Donkey Kong, Dig-Dug and Mario Bros. I can also now proudly say that I own a copy of E.T for Atari 2600! Score!

He also gave me a handful of boxed games. Each of the game boxes contained the cartridge and the instruction book. I rarely ever come across Nintendo or Super Nintendo games that are in their original boxes, and these games are even older than those are. One of the games is for Intellivision (Dungeons and Dragons). The boxed Atari games were Space Invaders, Outlaw, Dark Cavern, Surround, Pac-Man, Asteroids, Air-Sea Battle, Star Ship, Combat, Star Wars and G.I. Joe. 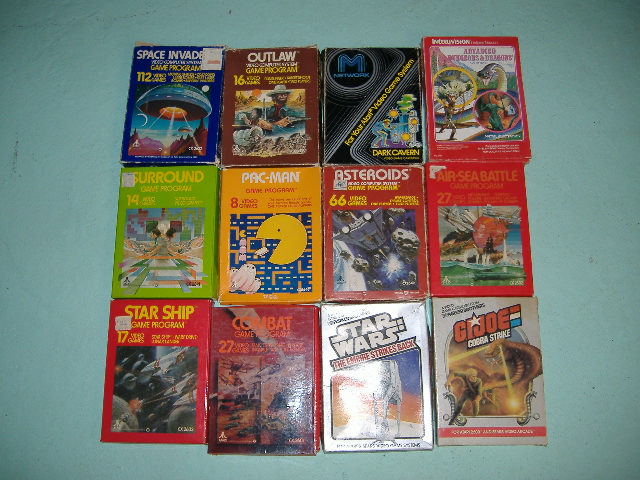 I really enjoy having these boxed copies with their original instruction booklets. Some of the artwork in the booklets is pretty fun. I scanned a few of the pictures from the Pac-Man booklet into my computer so that I could include them here. The best part about the artwork is that the artist had fun with it and you can tell. Pac Man’s character wasn’t as established then as he is now. I’m sure any artist hired to do Pac Man artwork these days has to follow strict guidelines. 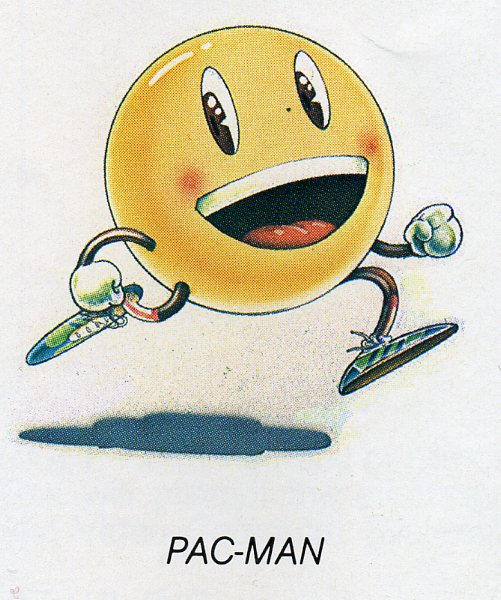 Thats it for this update. The weather is supposed to be in the 70’s in about 2 weeks and I’m sure people will start having a great number of yard sales as soon as that happens.

I sketched this out at work over the past week. I finished it up in Photoshop. I really miss this game, I really need to get my Turbografx up and running again (I just need to buy the power supply and TV hookups). I have AirZonk on my Wii (Virtual Console) but there is something that makes it feel better when you play games on there original systems. Plus, the turbo switches on the controllers were awesome.