Just finished an illustration for IF, the theme was “Midsummer Night”. It got me thinking about when I was younger, before I found out about skateboards(those took up all my summer nights after that) and how simple life was. Playing Ghost in the Graveyard and catching fireflies.  Well… here is my illustration:

I did the entire illustration while drinking beer, so I’m not sure how it’s gonna look when I’m sober. But I am trying to teach myself to be a little looser in my illustration style so I figured this would be an interesting way to test that out. As of right now I’m thinking that it looks pretty rad, we’ll see how I feel about it later.

Here are two paintings I made a long while back (maybe 2-3 years ago for Travis and 4-5 years ago for Frank, I still like them both a lot though).

The first one here is of Travis Barker, I never was a huge fan of Blink-182(The Aquabats however I loved) but I thought this made for a cool looking portrait.

The second painting is of Frankenstein. I love working in Acrylics, but its so much faster/less mess to clean up when working with digital. 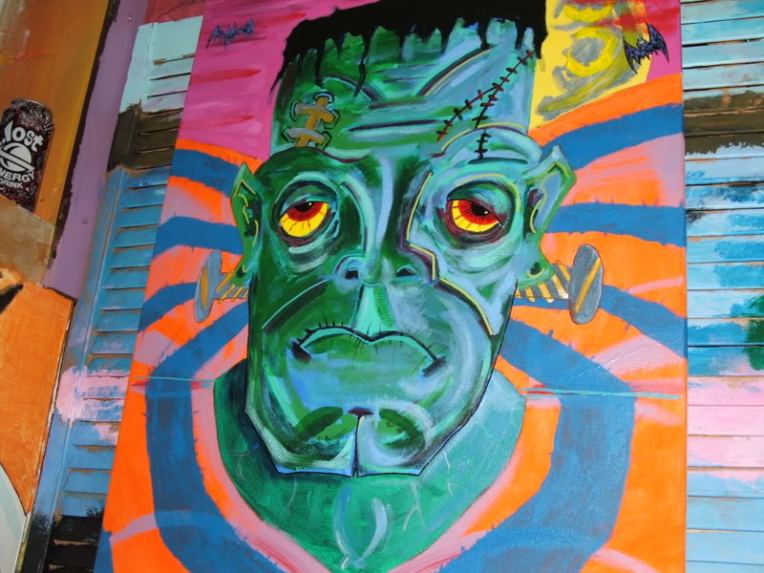 I am really excited to get to work on my piece for “IF” tomorrow and I don’t even know what the topic is yet! I think I dream about what the topic could be every Thursday night! Lame, I know! Hahahahahahahaha.

Today’s Illustrationfriday.com word was “Launch”, below is my contribution to the site: 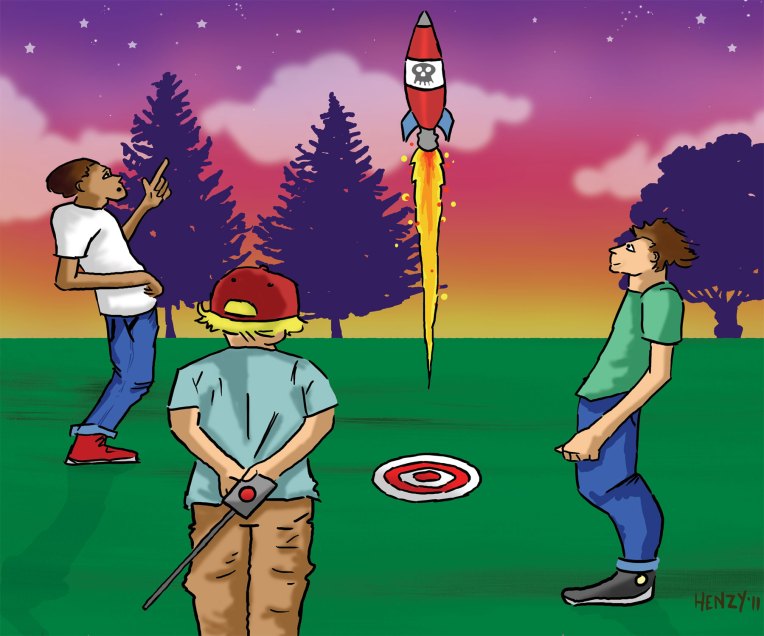 I always wanted one of these when I was younger. My Dad used to launch toy rockets when he was younger, and would bring it up every once in awhile when I was growing up. This was a really fun Illustration to make and I even got to sneak a skull onto the rocket!

Something I did for fun over the past two days… 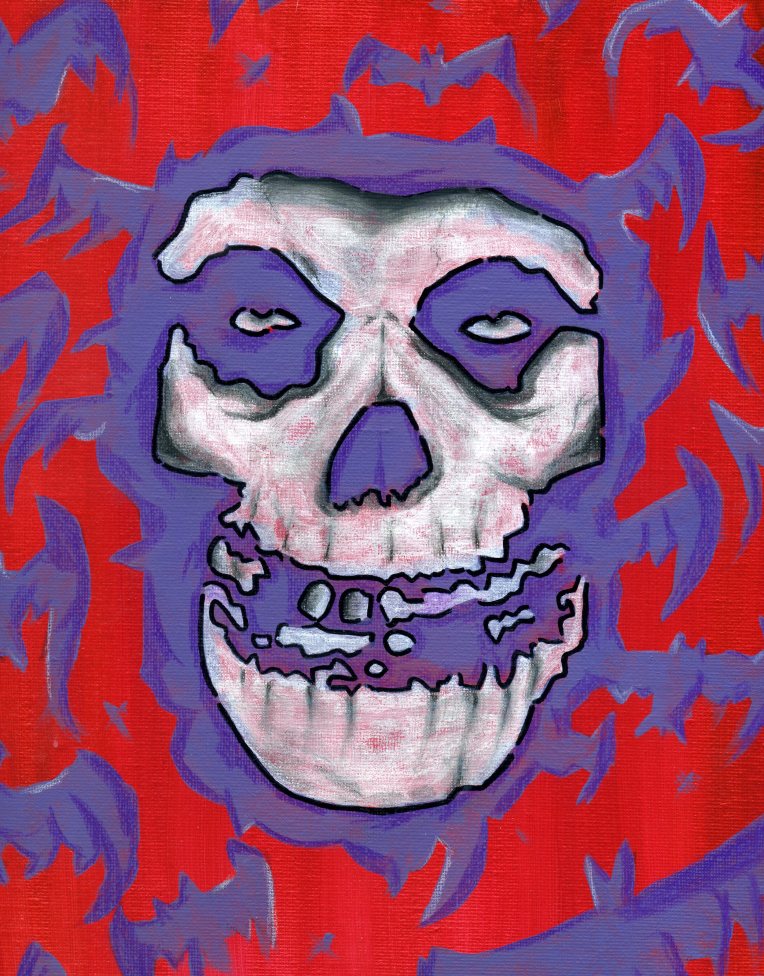 The scanner makes it look a little different than it really does, but it still looks cool. Acrylic/Pencil/Watercolor.

Here is the initial sketch I did:

I don’t really like sketchbooks and almost all of my sketches end up on scraps of paper, napkins or blank spots on newspaper ads.

I’ve learned that the best thing to do when collecting video games (or probably anything else) is to make sure people know that you collect them. Recently my brother-in-law stopped by my house with a big Tupperware container full of games. He said that his co-worker found out that I collected games and thought I should have his old stuff. He said that the guy said I could give him $10 or somthing for the lot. I ended up giving him $20 because all of the N64 games where games I didn’t allready own.

Here is what the Tupperware container had in it:

A bunch of Sega Games. A Sega surge protector, which is awesome, it has big spaces in between each outlet for those giant Sega Plugs. A few of the games are duplicates that I allready have (Sonic 1 and 2, Doom 32x, Ground Zero Texas and Sewer Shark). I am excited to try Road Avenger for Sega CD, I always heard that it was a great game.

I allready owned a Sega Genesis, Sega CD and 32x, but its always great to have an extra laying around. I plan on wet sanding this Sega Genesis and painting it a nice shiny white. I’ll post pics when its done. 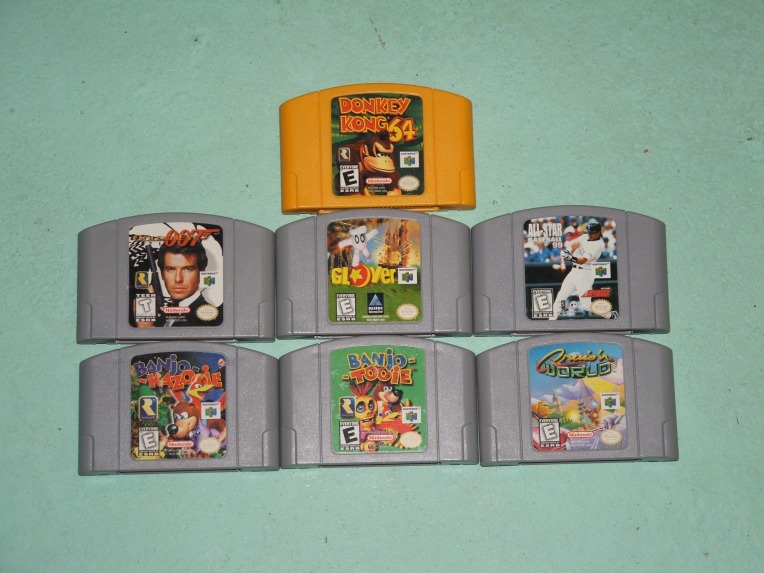 A bunch of N64 games. These are what I was most excited about. I didn’t already have any of these and had been looking for Cruis’n World for a long while.

There were also a bunch of Nintendo games in the box. I didn’t have any of these yet either. My favorite is Metroid(it even came with the instruction book!).

That’s it, I think it was a sweet deal for $20.00. I figured I would keep this posting short and sweet, plus I haven’t tried any of the games out yet so I can’t really talk much about them.

Till next time, see you guys later!

This weeks “IF” word was “Swept”. I’ve been very lucky recently in that the ideas for “IF” pop into my head almost immediately. I was thinking “swept out to the sea” or something like that. Anyway, here is the finished piece: 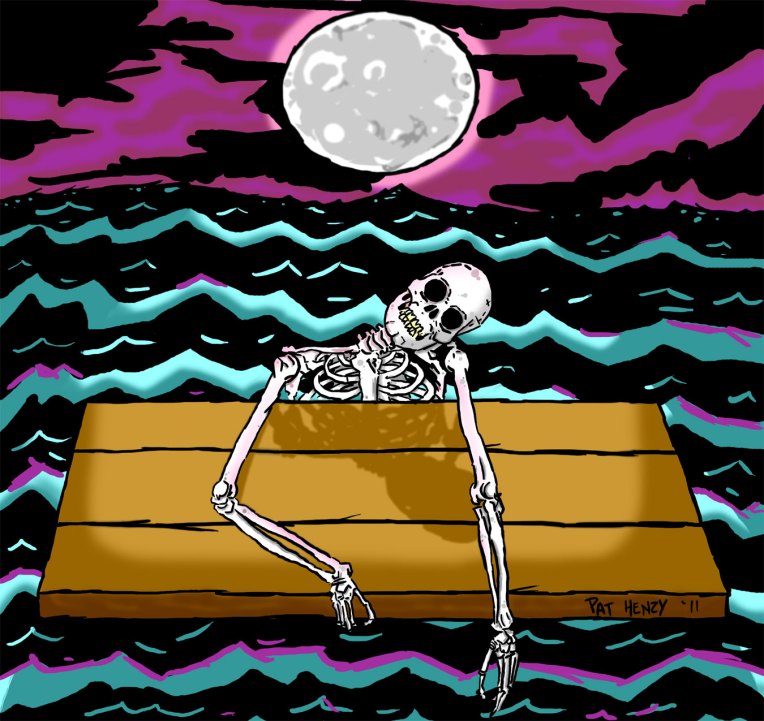 A flyer I’m working on for my friends band. (Update: The finished flyer is below, I added all the info and darkened the entire thing a bit).

The show was great too! They play acoustic Misfits covers and originals (inspired by The Misfits).

The theme for this weeks IllustrationFriday.com piece was “Shadows”. This popped into my head almost immediately and I started work on it at 8:30am. I finished at about 9:30am, not bad for about an hour of work.